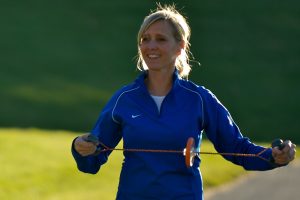 Let me tell you about an amazing experience. JyzePro was used by a group of 20 women in a 6-week fitness “boot camp.” They met together for one hour each day, five days a week. They used JyzePro + walking during warm up and cool down (about 20 minutes total) rather than jogging. They also used it in place of some calisthenics. A few struggled at first (it can be like walking and chewing gum for some), and most got the hang of it quickly. This workout combined with a focused diet and weekly weigh-ins (where they took measurements of arms, chests, waists, and legs) produced some phenomenal results.

After six weeks, these women had each lost at least an inch around their upper arms. A few lost close to two inches! Read what a few other JyzePro users are saying at here.